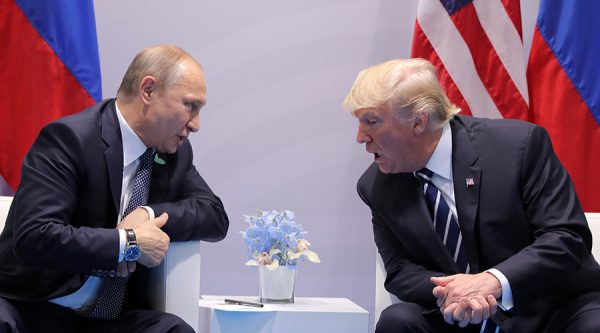 It’s no wonder the Trump White House detests the media.

Despite the fact that Donald Trump Jr. met last year with a Russian lawyer allegedly connected to the Kremlin who said she had dirt on Hillary Clinton — which turned out to be bogus — there is no evidence whatsoever proving that the campaign of Donald J. Trump “colluded” with Russia to “steal” the election.

But that hasn’t stopped the disgustingly dishonest “mainstream” media from continuing to push it, anyway.

The latest iteration of this came Tuesday evening, when Reuters and other outlets reported that Trump had a “second” previously undisclosed “meeting” at the recently concluded G-20 meetin

Reuters quoted Ian Bremmer, the president of political risk consultancy Eurasia Group, and no Trump ally, who alleged the second meeting in a client note.

Bremmer said Trump got up from his seat halfway through dinner and spent about an hour talking “privately and animatedly” with Putin, “joined only by Putin’s own translator.”

The lack of a U.S. translator raised eyebrows among other leaders at the dinner, said Bremmer, who called it a “breach of national security protocol.”

Except … not. The White House released a statement refuting every bit of that, as The National Sentinel reported.

There was no “second meeting” between President Trump and President Putin, just a brief conversation at the end of a dinner. The insinuation that the White House has tried to “hide” a second meeting is false, malicious and absurd.

It should be noted that Trump’s only real meeting with Putin did last much longer than many observers thought it would, which of course led to even more wild Left-wing media speculation about “collusion.” In reality, Trump pressed the Russian leader on the country’s alleged “interference” in the U.S. election, which later reports have claimed were much more extensive than first believed. Putin, Trump said, denied any involvement, which of course was expected.

But on that point, no U.S. intelligence agency thus far has concurred that the Russian interference changed any votes, therefore there is no proof of election “stealing.” Even Obama’s cyber security czar, Michael Daniel, has said that there is no evidence of vote-changing.

“I certainly think that the Russians or anyone else — they certainly didn’t change any votes, so that the votes that were cast properly reflect the votes of the American people,” Daniel said, as reported by the Times of Israel.

As for the “collusion” narrative, nothing has been shown to prove this narrative … as far as Trump is concerned. However, as Trump.news has reported, there is plenty of evidence suggesting real-live collusion between the campaign of Hillary Clinton, her husband, former president Bill Clinton, and Democrats in general. [RELATED: COLLUSION? Obama’s Justice Dept. let Russian lawyer who met with Donald Jr. into U.S. under special circumstances.]

As for the Trump-Russia collusion narrative, even some Democrats are now imploring their leadership to talk less about it because it isn’t resonating with the American people. The Hill reported in June:

In the wake of a string of special-election defeats, an increasing number of Democrats are calling for an adjustment in party messaging, one that swings the focus from Russia to the economy. The outcome of the 2018 elections, they say, hinges on how well the Democrats manage that shift.

“We can’t just talk about Russia because people back in Ohio aren’t really talking that much about Russia, about Putin, about Michael Flynn,” Rep. Tim Ryan, D-Ohio, told MSNBC in late June, as reported by The Hill. “They’re trying to figure out how they’re going to make the mortgage payment, how they’re going to pay for their kids to go to college, what their energy bill looks like.”

The Democrat-allied “mainstream” media, however, which doesn’t have to stand for elections, isn’t taking the hint.

J.D. Heyes is a senior writer for NaturalNews.com and NewsTarget.com, as well as editor of The National Sentinel.